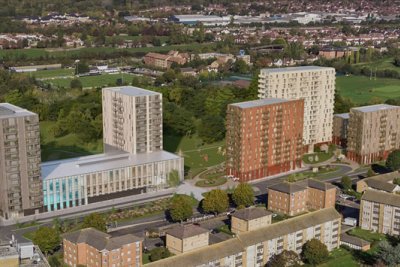 Developers Ecoworld have submitted a planning application to Ealing Council for their redevelopment of the Gurnell Leisure Centre along with a huge housing scheme.

The controversial development is largely unchanged from the designs that were published last year other than a reduction in the number of flats to 599. There will be six tall towers in the scheme, the highest of which will be 17 storeys and 1,800 people are expected to live in the scheme when it is completed. The development will require building on Metropolitan Open Land.

The current design for the leisure centre, which it has been estimated will cost £40 million, will see it house one of only four indoor 50m swimming pools in the capital. There will also be a fun pool for children, with slides and water features. There will also be a sauna and steam rooms, double height reception and cafe, a children’s indoor soft play area, a large 100-plus station gym with three large studios with sprung floors. In addition there will be a new children’s playground, skate park and BMX facility.

Ecoworld say that they will be holding the consultation about the proposal online with no public information meetings. They have launched a dedicated web site for the development.

The application reference is 201695FUL which you can use to search on Ealing Council’s planning portal to make comments. At the time of writing there were over 130 comments most of which were objections.

The council agreed to the redevelopment because they were unable to fully fund the rebuilding of the leisure centre from their own resources. Originally it was announced that the full cost of the development would be met by Ecoworld but last year the deal was renegotiated and it appeared that the council would have to pay for the building of around 200 of the housing units which would be classed as affordable. The report which included the cost of this new arrangement was deemed confidential. It is not clear whether the amount payable by the council has changed with the revised proposal.

In September 2019, Ealing Council’s Cabinet agreed in principal to be responsible for directly delivering both the leisure centre and roughly 200 units across two tower blocks – all of which will be affordable housing. Ecoworld would deliver the remainder of the scheme for open market sale as well as the basement serving both parts of the scheme.

The Stop the Gurnell Overdevelopment campaign currently has a petition online with over 2,000 signatures.

Ealing Council is proceeding with major planning applications during lockdown despite claims from opposition politicians that they pledged not to. They have not altered the way that they consult the public on major planning applications despite government advise to do so. They claim that planning applications published in The Gazette newspaper meet the requirement of the law which states that the notice must be published in a ‘newspaper in general circulation in the area’. Objectors to the scheme say that the paper is not distributed in the area around the development and that, if the scheme is approved, they would consider a judicial review of the decision and the failure to comply with the law on consultation would be one of the grounds they would ask the court to consider.