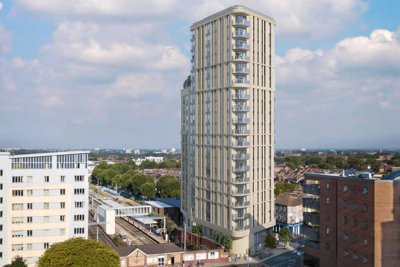 A proposal to build a tower block in Manor Road West Ealing has resulted in a huge level of opposition with over 700 objections so far to the application.

This is despite the scheme being a revision of the original plan by Southern Grove and Metropolitan Thames Valley Housing to build what they described as ''the UK's tallest fully-affordable tower''. The current proposal is 19 storeys high compared to 26 storeys which the developer originally wanted.

The statement issued with the application says, “Given the outcome of the consultation, Southern Grove have reviewed their proposals and are now proposing a much reduced building in terms of height as set out in this document. They have appointed a new architecture practice, DMWR, to take forward the scheme with a fresh approach.”

The latest scheme will see the demolition of existing buildings at 51-56 Manor Road and 53-55 Drayton Green Road and the construction of a new structure over a basement with part 12 and part 19 storeys. There would be 144 flats all of which would be classed as affordable. The scheme would be directly above West Ealing train station which is due to receive the Crossrail service when launched.

The grounds for objection that have been made include the density of the scheme in the context of the local area which it is claimed is nearly four times more than the current maximum density recommendation for the site, the contradiction that the scheme presents to the borough’s neighbourhood plan and that the massing of the scheme crams too many housing units into a small space and creates an oppressive structure which dominates the surrounding area. The design of the building is also criticised as well as the lack of amenity space of the residents.

Anyone wishing to comment on the scheme must do so before 29 July. The link to the application on the Ealing Council planning site is here.