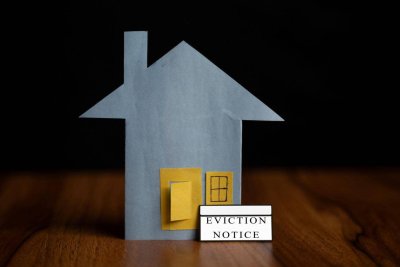 Thousands of renters in England who have built up rent arrears as a result of lost income during the pandemic could now face eviction after new government regulations were introduced.

During the coronavirus pandemic, renters have been legally protected from eviction except in the “most egregious” cases.

These include fraud, illegal occupation, anti-social behaviour, domestic abuse in social housing and tenants who owed more than nine months’ rent, accrued before March 23, 2020 – at the start of the first national lockdown.

A recent report by the National Residential Landlords Association found seven per cent of private renters (equivalent to 840,000 people in England and Wales) could have fallen behind on their rent payments as a result of the pandemic.

The change was included in the latest statement extending the eviction ban for six weeks past the “Christmas truce”, which was scheduled to end on Monday, January 11.

The Scottish government made a similar move yesterday.

The government had already confirmed that if an area is in local lockdown that includes a restriction on gathering in homes, evictions would not be enforced by bailiffs.

Communities Secretary, Robert Jenrick, said the government was “helping to protect the most vulnerable renters” by extending the eviction ban.

Both landlords and tenants said the eviction ban did not go far enough.

Franz Doerr, CEO at rental tech platform flatfair said: “Around half-a-million renters are in arrears yet the government is once again kicking the can down the road as private tenants face being plunged further into debt.

“Unlike Scotland and Wales, England has not introduced a tenant loan scheme which would provide struggling renters with a means to cover their tenancies. It means mountains of debt continue to pile up at the feet of landlords, who the government unfairly expects to continue propping up the rental market."

Ben Beadle, Chief Executive of the National Residential Landlords Association said: “The repossessions ban is a sticking plaster that will ultimately lead to more people losing their homes.

"It means tenants’ debts will continue to mount to the point where they have no hope of paying them off leading eventually to them having to leave their home.

“Instead the Government should recognise the crisis facing many tenants and take immediate action to enable them to pay their debts as is happening in Scotland and Wales. The objective should be to sustain tenancies in the long term and not just the short term.”

Scotland and Wales have introduced a tenant loan scheme for renters struggling to pay rent.

Oli Sherlock of lettings platform Goodlord said: “We are concerned that a further extension to the ban without additional provisions for landlords and tenants is storing up even more trouble for the future.

“For tenants, accruing arrears cannot be ignored. These debts will eventually catch up with them and the small proportion who aren’t engaging proactively with their landlords will eventually find themselves facing County Court Judgements, which can have a long-term impact on their credit ratings. The more debt individuals get into now, the more serious the consequences.

“We must ensure that systems, potentially similar to those in Scotland and Wales, are in place so tenants stay on top of their rental payments and keep arrears low, or are supported to move to cheaper properties if needed.”